The piece will feature a teenager and her parents meeting their egg donor, and her two daughters, for the first time! Very emotional, showing how important these connections can be- for all involved. Read about it in USA Today and in the June 5th Tennessean: Nashville Teen Finds Her Egg Donor:

Janet Schreibman read “Goodnight Moon” and “Curious George” and all the usual children’s books to her daughter, a thoughtful little girl who always wanted another story.

So her mother told her one, a small, simple piece at a time, about the child’s unusual conception.

Sometimes mommies and daddies need help if they want to have a baby, Schreibman would say. Children are created in all different ways. One way is called in vitro fertilization.

Brittan Gilmore was about 7 when she put it all together, confronting her mother anxiously instead of climbing into bed. “Are you my real mom?” she asked.

Schreibman paused. The day was here.

“I’m your real mommy,” she said. “But you have another mommy, too.” 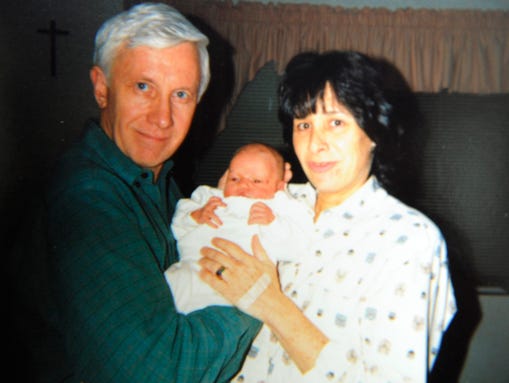 Janet Schreibman and her daughter Brittan Gilmore and husband Jim Gilmore look at baby photos of Brittan, who was conceived with an egg donor. The family searched to find the Brittan’s biological mother.(Photo: family photo Shelley Mays/The Tennessean)

Nearly a decade later, the Nashville teen and her egg donor came together in a way as modern as her birth, after a search on an Internet database, a timid message on Facebook and, finally, a tearful introduction on Katie Couric’s daytime TV talk show. That’s not the end of the story. Brittan’s experience getting there made her an advocate for an open system that would allow willing egg and sperm donors to connect with their offspring.

The story begins with JoLana Talbot, a 23-year-old woman married to a soldier deployed from Fort Campbell. Talbot’s friend responded to a newspaper ad seeking an egg donor and shared her experience. There are so many families who need help at Nashville Fertility Clinic, she said.

Talbot’s job was basically to be a human egg farm — take hormone shots to increase production, but no smoking, sex or drinking, not even coffee. She donated seven times — 348 eggs total — and earned $1,500 per donation. Eventually she divorced, remarried and moved to just outside Houston.

But she always felt an attachment to the eggs she left in Tennessee.

She called the fertility clinic every time she moved to leave her new address, in case there was ever a medical crisis someone wanted to ask her about. “It would be selfish to say, ‘I don’t ever want to be found or noticed,'” she said.

Janet Schreibman, her daughter Brittan Gilmore and husband Jim Gilmore look at baby photos of Brittan, who was conceived with an egg donor. The family searched to find the Brittan’s biological mother. (Photo: Shelley Mays/The Tennessean )

Some of those eggs went to Schreibman and her husband, Jim Gilmore, who’d married 10 years earlier knowing fertility would be a challenge after Schreibman experienced early menopause.

Brittan was conceived on their second IVF try — Gilmore the biological father, Talbot the biological mother, Schreibman carrying the embryo. She was 46 when she gave birth, snapshots from the day capturing her propped up in the hospital bed, staring at her newborn incredulously.

The decision to tell Brittan about her birth led to adolescent curiosity and then to the Donor Sibling Registry, the creation of Colorado mom Wendy Kramer and her son, who started it in 2000 with a Yahoo.com group. Today, more than 43,000 donors, parents and donor offspring are registered with 11,000 sibling and other matches.

Parents like Gilmore and Schreibman, who are honest from the beginning, have the best relationships with their kids, Kramer said.

“We feel there’s no reason to keep these people from each other,” she said. “DNA does matter. If it didn’t matter, we’d give birth to whatever child we gave birth to at the hospital and then just pick a baby and go home.”